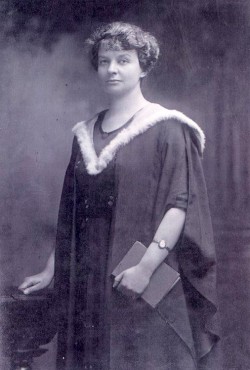 The founder of the National Council of Jewish Woman of Australia, Dr Fanny Reading was born in Russia (1884). Reading’s father fled Russia for Ballarat soon after her birth. Fanny and her mother spent some time in London before they were able to join him. Of the family’s arrival in Ballarat, Fanny said, “No one wanted to know us.” This sense of isolation and loneliness remained with her throughout her life and explains her affinity with migrants and refugees. In the early 1900’s the family relocated to Melbourne where Fanny completed her secondary education.

Fanny taught Hebrew to private students, before she attended the Conservatorium of Music of Melbourne University, gaining a Diploma of Music in 1914. She returned to the university to study Medicine, graduating in 1922, following which she moved to Sydney and established a medical practice with her brother in Kings Cross.

In 1923, inspired by the visit of Zionist emissary Bella Pevsner, Fanny founded the Council of Jewish Women – a Zionist organisation which was active on a range of women’s issues, both Jewish and non-Jewish. The original aims of the organisation were based on:

Service to our religion, to our people and to the country in which we live

In building a national sisterhood, Fanny Reading wanted women to realise their full potential and take their place as individuals, as Jews, as women.

Through both the National Council of Jewish Women and the Australian Jewish Welfare Society Dr Reading was active in immigration reception work in the 1930’s, particularly assisting Jewish refugees from Nazi Germany.

Fanny Reading was small of stature and quietly spoken. Her compassion for the needy was limitless, driving her and her co-workers relentlessly, but no one worked harder than she did.