MICHA Tel Aviv’s mission is to enable children with hearing loss to acquire language, speech and communication skills in order to best facilitate mainstreaming into the public school system.

The MICHA Tel Aviv Multidisciplinary Center for Children with Hearing Loss, is a not-for-profit organization founded in 1953 by Dr Ezra Korine, an Ear Nose & Throat physician and Director of the Audiology Clinic at Sheba Hospital in central Israel. Upon observing the unsatisfactory care available at that time and the distress of children with hearing impairment, Dr Korine initiated the concept of creating a multidisciplinary center which would provide these children and their families with all necessary services under one roof. In 1976 Dr Korine was awarded the Israel prize for his outstanding contribution to society. NCJWA became involved with the work of MICHA in 1977.

MICHA cares annually for approximately 460 children from varied ethnic, socio-economic and religious backgrounds, from the critical period of infancy through first grade. MICHA serves as a regional therapeutic center for Children coming from Hadera in the North to Ashkelon in the South, and from Modi’in in the east (includes a large concentration of Arab Israeli communities) to coastal cities in the West.

Experience has shown that early identification of hearing impairment, together with professional intervention during the critical stages of infancy and early childhood, can significantly increase a deaf child’s chances of integrating with his hearing peers.

To find out more about MICHA Tel Aviv and Central Region, visit their website. 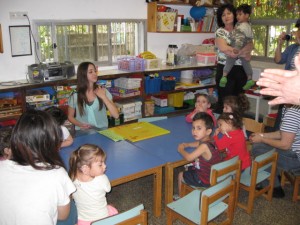